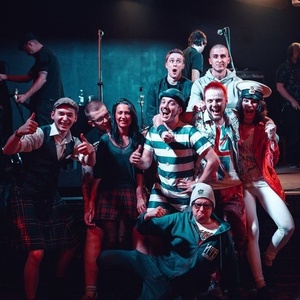 Garlic Kings are a young folk-streetpunk band from St Petersburg (Russia). Formed not so long ago (in the end of 2009), the band has already showed themselves to advantage in the folk communities of the city as long as in the punk&skins communities. The musicians adhere to a position of ‘No politics No racism’. The band’s music represents rather an intriguing mix of pirate, sea and port romance, boisterous punk, covers of popular songs unusually interpreted, all of it made rich with a fair portion of folk instruments, flavoured with Celtic jigs and spiced with a decent spoonful of cynical humour. The main orienting points in the band’s music are world-famous ‘pillars’ of the genre: Flogging Molly, Dropkick Murphys, The Tossers, The Pogues. But surely the Garlics add their special spice and poignancy to music.