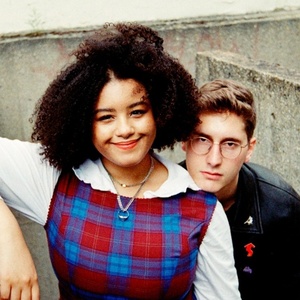 Fronted by joni samuels' snarling guitar and backed by karsten van der tol's thundering drums, fräulein create an explosive sound which can be regularly found across alternative uk venues.
Arguably the biggest weapon in their arsenal is joni's intricate melodies, combining sharply observational lyrics with surrealist imagery. the duo are inspired by the wide range of genres they take in, ranging from trip-hop to grunge to latin. with karsten hailing from the netherlands and joni from northern ireland, they coincidentally met at a friend's jam night in 2018, where the pair instantly connected on a rhythmic level.
Their early home demos circulated on the the underground music scene, bringing the band early press attention. since then the band has made the move to london, opened for goat girl at diy magazine's 'big bank holiday weekender’ and played sold-out shows across iconic venues like the windmill, amersham arms and the old blue last.